When Governor Newsom gave the green light for counties and cities to enact their own eviction moratoriums and exercise extraordinary police powers reserved for times of crisis, municipalities did not have to be told twice. Lawmakers were quick to enact temporary ordinances designed to prevent the spread of the virus and to preserve housing.

We believe this reflex was morally right and wholeheartedly agree with politicians, industry trade partners, and tenants’ advocates alike that now is not the time to attempt to evict tenants. Yet municipalities seem to be under the impression that they have been given carte blanche to rewrite state law. By definition, temporary emergency ordinances are short-term measures to deal with a calamity, but lawmakers have used these band-aid fixes as a laboratory of sweeping, enduring tenant protections and erode the rights of property owners.

Under the dome of the capitol, a proposal to slash rents 25% across the board was stalled, but undiscouraged tenants’ advocates concocted another bill that would authorize tenants to stop paying rent indefinitely.

Assembly Bill 1436 would create a statewide prohibition on evictions for back rent owed due to the public health crisis and give distressed renters up to 15 months after states of emergency have been lifted. The law would make no distinction between tenants with the financial ability to pay rent and those who have been genuinely impacted by the pandemic. Even tenants who have steady-drip, guaranteed government payments can stop paying rent, but it doesn’t stop there. Owners would not be able to tap into security deposits to recoup rent defaults, which means this reserve of funds can only be applied to property damage if this bill is passed. Since rent is deferred and not waived, it would also give tenants a mountain of debt – as one of our astute followers pointed out, “defer does not eliminate the debt, it just postpones it, so how will someone pay back 15 months of rent?”

Clever marketing – take away and what is remaining is a gift

AB-1436 is touted as a “balanced” approach for tenants to get back on their feet without fear of imminent eviction while allowing landlords to recover lost income.

Owners are stripped of the ability to use an unlawful detainer action, cannot tap into the security deposit, and are further prohibited from making a notation on the tenant’s credit report. Nonetheless, the bill is sold as a gift to landlords because they would still retain the right to sue the tenant to collect the debt. Having a host of rights taken away from them, landlords should celebrate they have any recourse whatsoever by pursuing civil remedies? That is how the sales pitch is narrated. California will take away most of your rights, but after losing months of rent, you still have a shot in the dark to recover losses in civil court.

Launching our bill to stop evictions for non-payment during the COVID emergency. California simply cannot afford a wave of mass evictions. We have to act.

Give an inch, take a mile

We don’t want to get lost in the weeds and rattle off a bunch of case law, but there is a cogent argument being made that the tampering with owners’ unlawful detainer (eviction) rights flies in the face of the constitution. Executive orders allow municipalities to suspend access to unlawful detainer procedures until such time the Governor’s order is lifted – they cannot last in perpetuity. In fact, explicit guidance is given in a provision that says no law can “restrict a landlord’s ability to recover rent due.”

Furthermore, the right of an owner to recover possession of his or her property based in part on any unpaid rent is well ensconced in state law, and just as settled is the inability of a city to use their police powers to enact an ordinance that conflicts with state law. Constitutional issues abound.

Nonetheless, many municipalities have availed its newfound powers to not just erect protections that are fleeting in nature, but ones that extend past the expiration date of the emergency. Worse, they are sprinkled with restrictions that defy California law. In San Francisco and Alameda County, for example, back rent debt accrued during the pandemic is reclassified as consumer debt and the owner is barred from using California’s eviction process to recover the debt or gain possession of the unit. 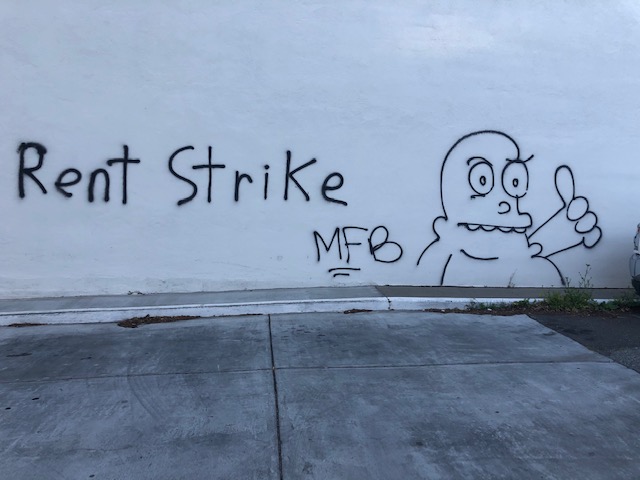 Municipalities push back from calls to waive rents

We have been captivated by the graffiti plastered throughout the Bay Area calling for the cancellation of rent and have taken our own photos of displays like the one depicted above. Of course, these acts of protest have also been animated by real people who display signs and chant for rent forgiveness.

While the cries for erasing rent debt altogether have been covered quite a bit from the media, it has not translated into any meaningful action as cooler minds prevail. We have seen Santa Clara County, San Jose, Berkeley, Richmond, and other locales take a serious look at wiping out rent obligations until city attorneys and other sober minds have pointed to constitutional concerns of taking property without compensation and the premonition that if rent waivers are passed, municipalities would be on the hook to pay back lost rental income once such an ordinance is inevitably shot down by the courts. 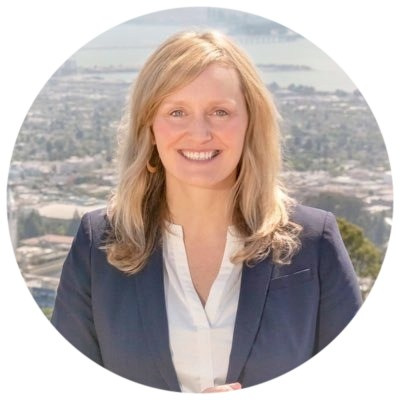 If we do nothing, we will see hundreds of thousands of evictions in our communities, and the number of homelessness will increase. It will result in more people on the streets.

We take exception. Our own anecdotal evidence does not support the prediction that a tsunami of evictions will result from the pandemic, and there is no upside for landlords to go on an eviction spree. Instead, we have seen landlords and tenants working together to land softly on the other side of the crisis.

We always operate under the presumption that there are good landlords and bad landlords. Likewise, there are good tenants and bad tenants. By and large, though, owners and residents have felt the pain of one another and brokered payment arrangments whenever there is a shortfall in income. We recommend that all interactions with the tenant are documented, and if a more formalized forbearance agreement would give you peace of mind, we have prepared a library of correspondence to use here.

A resilient and adaptive bunch

The agenda of tenants’ advocates have morphed into many forms and fashions. If local or statewide rent controls are rejected at the ballot box, some concessions could be made to codify it into state law. If statewide law or ordinances are not savory enough, it can be brought back to the voters again to ask for a change of heart. If Costa Hawkins exempts single-family homes and this cannot be repealed, you can redefine the meaning of a single-family home in the courts and expose these structures to rent control.

We are awestruck by the inventiveness of a movement that is hellbent on scraping away owners’ rights and if it’s too ambitious to do it all in one bold initiative, the rights of owners can be melted away slowly as if it was a candle. 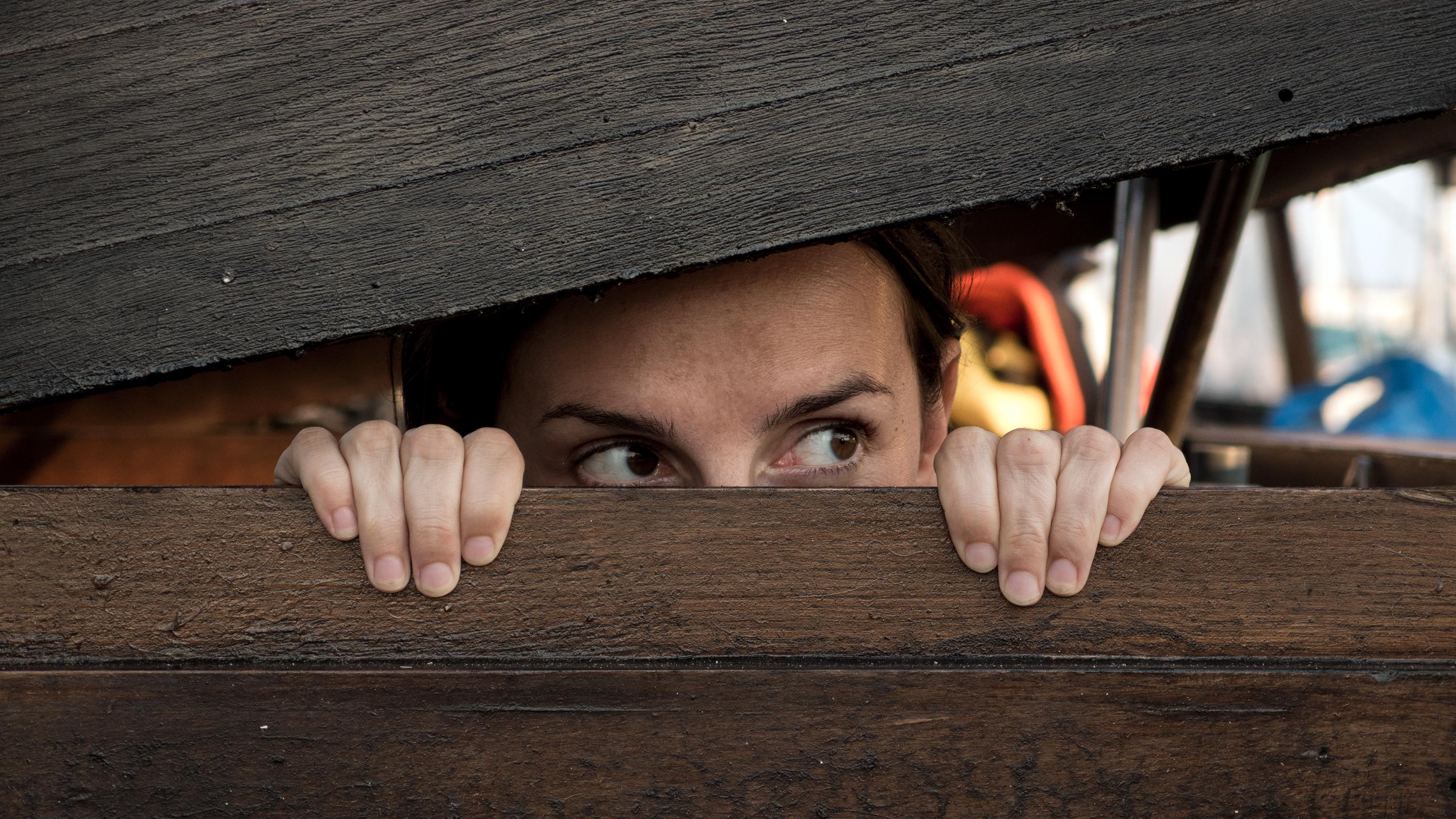 COVID provides the perfect cover to be exploited

While tenant protections were necessary to preserve housing during the pandemic, the public health scare has become a license to advance the agenda of tenants’ advocates who seek greater safeguards that would last far beyond temporary states of emergency.  Ironically, while landlords have been told to refrain from rent increases during disasters and adhere to price-gouging bans, our current crisis has served as a springboard for crusaders to accomplish what cannot be inked during ordinary times.

In a July 9 webinar, Daniel Bornstein will discuss landlording on the other side of COVID and recover lost rent, and we invite you to register for this free online event here.